At long last I’m proud to announce the release of Tiled 1.0. This release is based on a branch of development that started 1.5 years ago, with the goal of better supporting the use of external tileset files alongside map files. In addition I wanted to resolve all the loose ends that made Tiled feel incomplete. Last but not least, a huge amount of other welcome improvements were made by a record number of contributors!

Here are some of the major new features in this release:

This is a change that will likely affect your workflow, unless you stick to using embedded tilesets (which are still supported). With the large amount of meta-information stored in a tileset, external tilesets are a great way to share this information across maps. Until now, these files could not be properly edited in Tiled.

Now you can open and save tileset files independently of map files and they can be modified the same way that embedded tilesets can. In addition, all open external tilesets are now visible in the Tilesets view, and they will be added to your map automatically when you start using them.

Visible changes include the tab bar being now on top of the tool bar, since different tool bar actions and views are used when editing a tileset as opposed to when editing a map. Also, in the tileset editor you’ll now find that the terrain information editor and tile collision editor are integrated as dockable views. 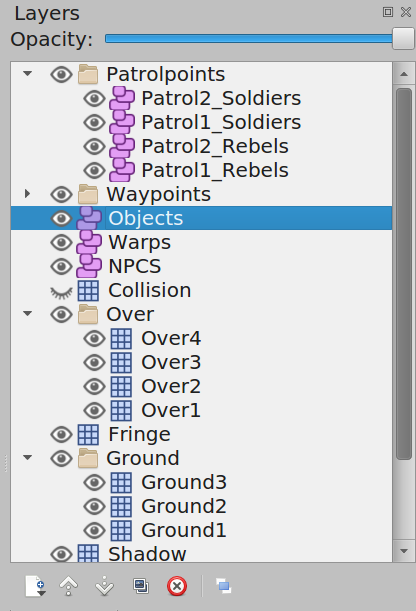 For those of you working with a large amount of map layers, there is now the option to organize layers in a hierarchy of groups. Properties like the opacity and visibility will apply recursively to all layers in a group.

In addition, layers can now be reordered by using drag-n-drop.

Also, cut/copy/paste actions for custom properties have been implemented.

You can now insert text objects in your maps, either for visual or for annotation purposes. For each text object, you can control its font, color, alignment and word wrapping properties. 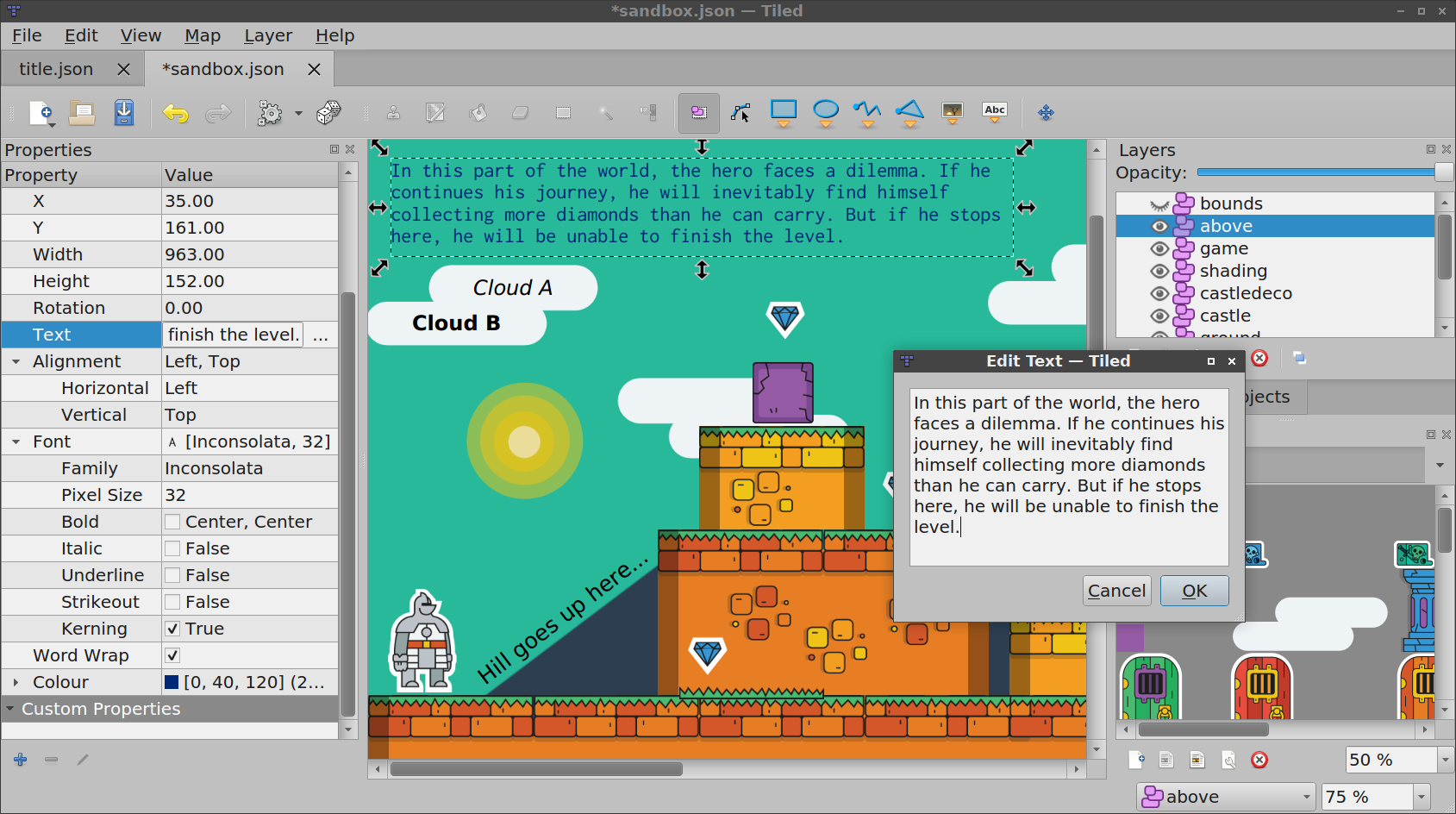 Apart from this new object type, other improvements have been made to handling objects, including an improved selection rectangle, the ability to select objects below other objects and synchronizing the current layer to the currently selected object.

The support for hexagonal and staggered maps has greatly improved. The fill tool now works properly for these maps, the stamp brush no longer acts weird due to the staggering and finally hexagonal rotation (in 60-degree increments) was added.

Many more improvements were made, here is the full list:

Thanks to everybody who contributed to this release with bug reports, suggestions or patches!

With Tiled 1.0 out, I aim to focus a bit of time on completing the User Manual and also documenting the level of Tiled map support by the various libraries and frameworks listed there.

Of course, feature development will continue as usual as well! On May 30th our Google Summer of Code students will officially start with their projects, which will likely form the basis for Tiled 1.1.

Getting to this major release was only possible thanks to over 190 patrons supporting me on a monthly basis as well as many people choosing to pay for Tiled on itch.io. As of this writing I still need more support to reach my two-days-per-week funding goal. Please chip in if you can to ensure Tiled keeps getting better!