It’s been over a year after the release of Tiled 1.2 and a lot has happened since then. I’m happy to announce the immediately availability of Tiled 1.3 “Make It Yours”, extensible with JavaScript and including many new helpful features.

The biggest change in this release is the introduction of the scripting API, which allows you to extend the functionality of Tiled with JavaScript. Scripts can implement custom actions, custom editing tools and add support for additional map or tileset formats.

Almost everything that can be modified through the UI can be changed through a script as well. Scripts can also connect to certain events to automate actions, for example on loading or saving an asset. Any changes made by scripts automatically create appropriate undo commands, which can be grouped together using the Asset.macro function.

Scripts can be grouped in folders to make it easier to share them with others, for example by cloning a git repository into the extensions folder. Tiled automatically reloads the scripts when it detects a change to any loaded script file.

A new “Issues” view was added, where reported warnings and errors are displayed persistently and can be searched. Many of the issues reported here can also be double-clicked to jump to the relevant location for fixing the issue. The error and warning counts are displayed on the status bar to make sure they don’t go unnoticed.

While Tiled may encounter many issues of itself, for example when AutoMapping or exporting to certain formats, issues can also be reported through the scripting API. This could be used to add sanity checks to make sure your map won’t trigger an error in your game.

The keyboard shortcuts of most actions can now be changed from the new Keyboard tab in the Preferences. Shortcut schemes can be imported and exported and potential conflicts are marked in red.

Tiled now features a native up-to-date check, which displays an unobtrusive notification in the status bar whenever it detects that a newer version is available. This replaces the previously used 3rd-party solutions Sparkle and WinSparkle. For those who don’t want it, it can be turned off in the Preferences, in which case you can still manually check for a new version by opening the “About Tiled” dialog.

The new system does not automatically download & install the new package. For automatic updates, I recommend installing Tiled through the itch.io app. 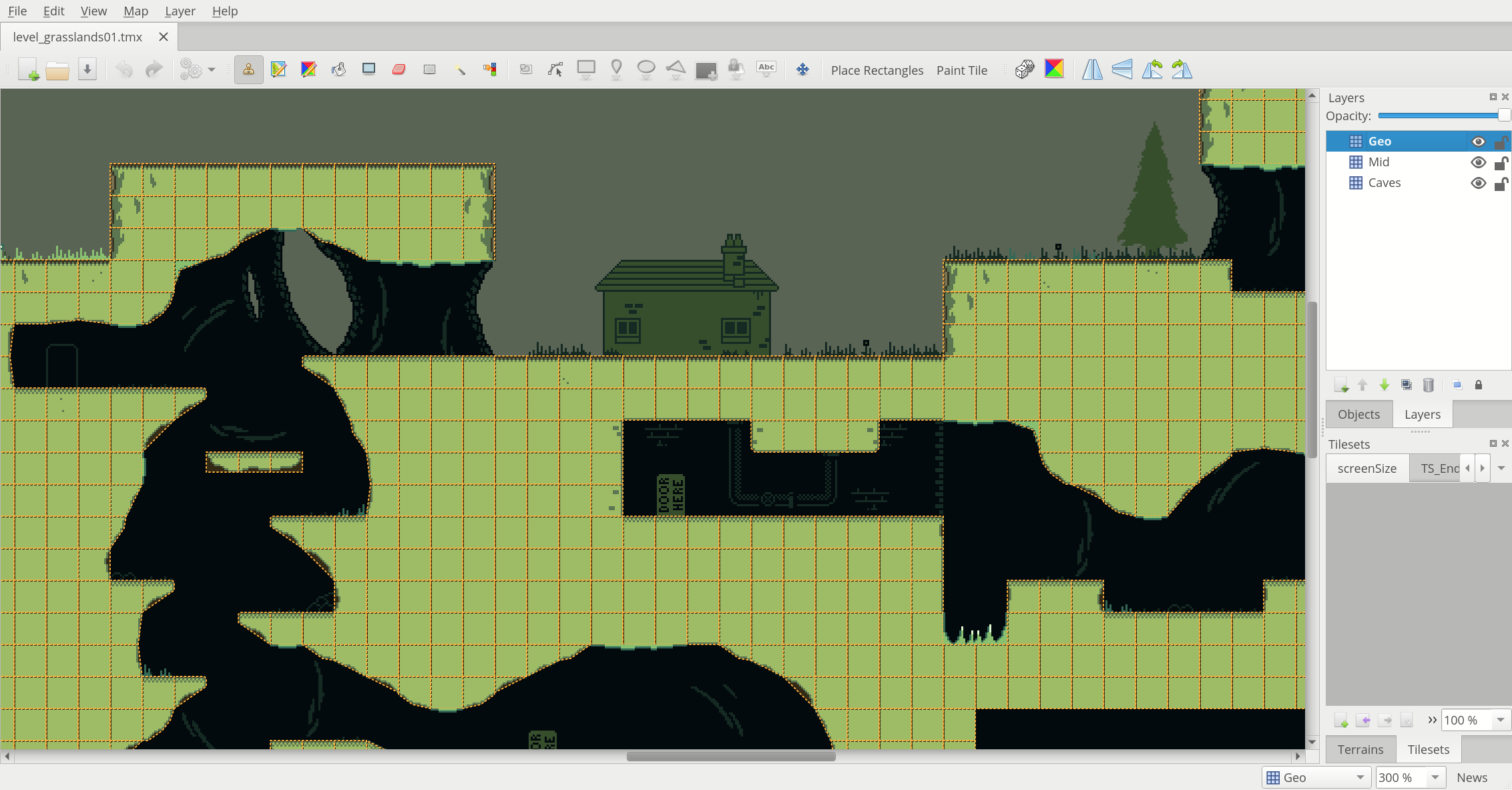 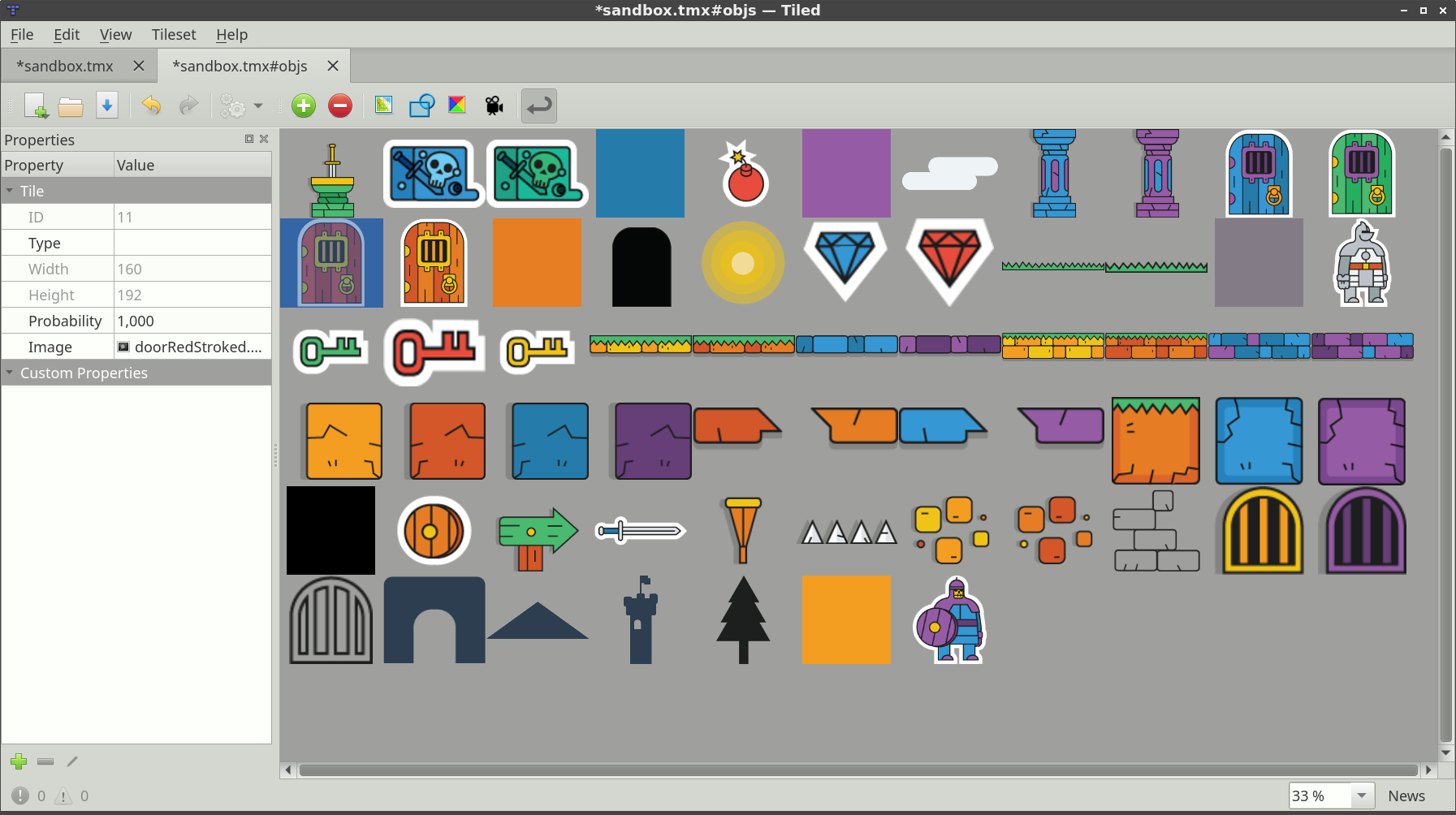 It’s been a long time since the last new features release, so it’s hard to summarize the large amount of improvements and new features. To name a few, there is a new option to display tile collision shapes on the map, you can switch layers by Ctrl+clicking the map view, a dynamic wrapping mode was added to the Tilesets view, the tmxrasterizer learned how to render entire worlds, the last export parameters are now remembered and export can be automatically triggered when saving, newly opened maps are now scaled to fit the view, etc.

Many smaller improvements and bugfixes could not be mentioned. Here is the full list:

The roadmap for Tiled 1.4 mentions the following major features:

With 1.3 done I plan to go full steam ahead on support for projects, which was dropped from 1.3 to avoid further delaying the release. I scheduled the 1.4 release in Q1 2020 with the aim to reduce the time between feature releases but feel confident that I can also add support for connections between objects.

Other than those items, I expect we’ll also want to make further extensions to the scripting API, to make it even more powerful and add further UI interactions, which are currently very limited. But first I want to see what people will do with the scripts and what functionality they may be missing, so be sure to provide feedback!

Your donation primarily enables me to work 2 full days/week on Tiled. With additional funds I can spend more time on Tiled every once in a while. Let’s make this tool even better!